On May 16th, 2019, LHS Helpdesk students visited the Perkins Braille and Talking Book Library in Watertown, MA. The tour, given by Erin Fragola, the Library Outreach Coordinator, was an absolutely amazing experience.  The students saw the expansive audio book collection and they learned about assistive technology such as voice operated microwaves/photocopiers, and audio described videos.  Additionally, the LHS students saw the extensive  Braille book collection and were amazed to see how one book in a series could be three giant volumes of Braille. They also saw the recording studio where volunteers record audio books for the library. 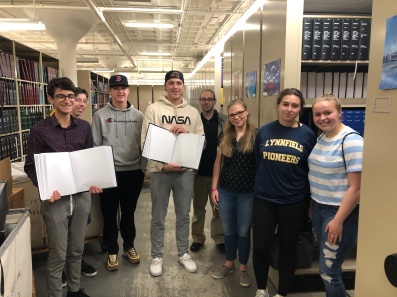 One of the highlights of the visit was seeing the Perkins Museum. ”

Visitors can learn about the history of Braille writing machines, from crude devices made of wood and steel to today’s sleek, colorful Perkins Braillers. Also available for exploration are tactile board games like chess, early books for people who are blind and the oldest and largest tactile globe in the United States.

The Museum showcases a number of historical figures with a connection to Perkins, including philosopher and author Henry David Thoreau; poet Julia Ward Howe, who wrote “The Battle Hymn of the Republic;” inventor Alexander Graham Bell and Louisa May Alcott, author of Little Women.” (https://www.perkins.org/history/visit/perkins-museum).

Helpdesk students were also shown 3D models of historic landmarks, games in Braille,  currency readers, and talking book readers.  When asked to answer the question, What was one thing you learned?, students responses were, ” I didn’t know that there was a way to read before Braille was invented [Boston Line type]. It was very interesting to learn why Braille was invented because the other system was too hard. It was also very cool to touch a book with that system written in it.” and “I learned about the Braille letters. Before I went to the library, I was curious about how students there learned the alphabet.”, and “I learned that Perkins Library doesn’t just serve the blind, but also people with dyslexia, people with partial vision, and anyone who has trouble holding a book.” 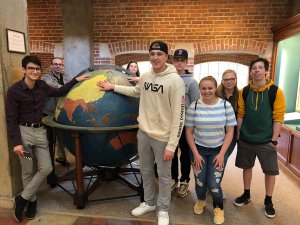 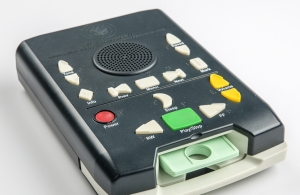 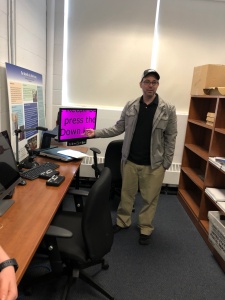